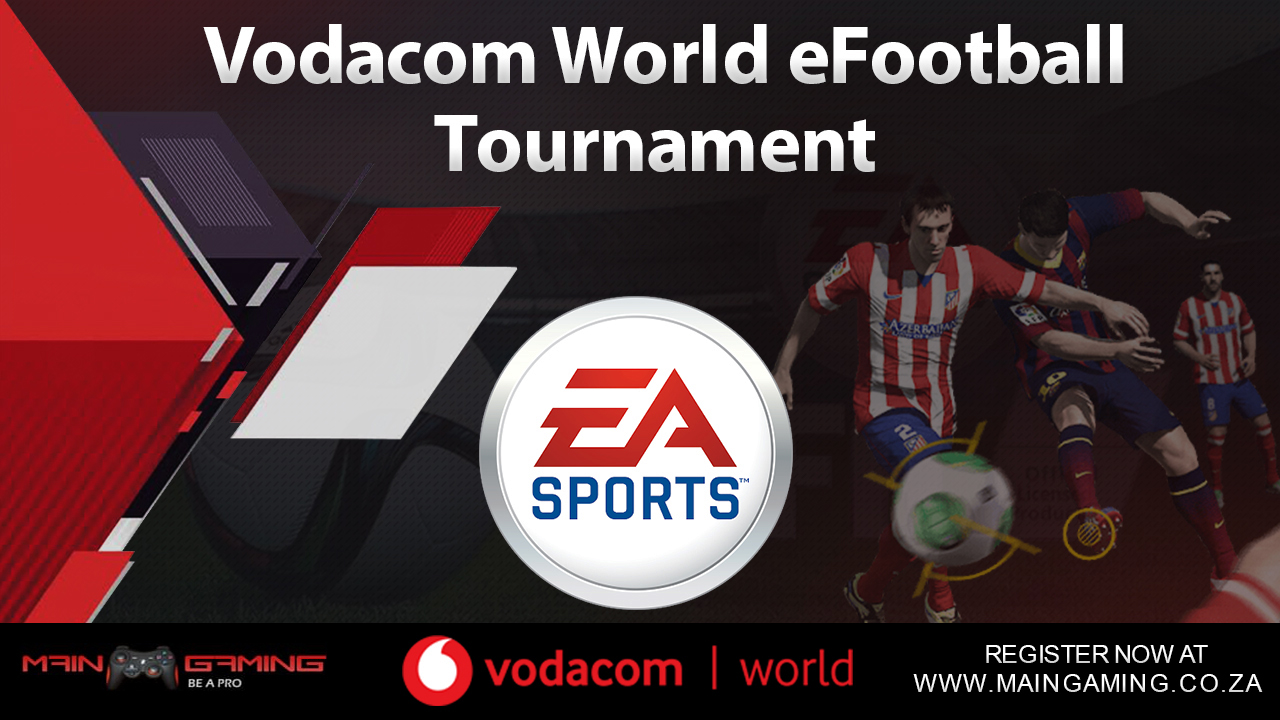 The Vodacom World eFootball Tournament is back! Only this time, it will be completed Online!

We have two remaining qualifiers to complete, participants from the qualifiers will then compete in a Grand Final where there's R30 000.00 up for Grabs!

Click on the slides below to find out how to enter, how the tournaments works and stay clued up with the rules!


NB: You will need a PS4, FIFA20, Playstation Plus and a strong internet connection to enter this tournament.

There will be multiple Giveaways where one can win great prizes through various activites and competitions, stay tuned to our social media platforms on how to get involved!

These Rules will be used for The Vodacom World eFootball Tournament.

Here you will find Rules for the Tournament

You may enter in both remaining qualifiers, Please be online and ready no later than 16:00 on the day of the Qualifier

This has been completed.

This has been completed.

18th to 22nd August – Grand Finals :
• Players will be seeded into 8 Groups
• Each Group will have 4 players
• Players will compete in a Round robin format with the top two participants progressing to the Round of 16.
• Players will compete in a quarter final, semifinal and Final.
• Grand Final will consist of top 32 Players.
• Top 4 players of the Grand Final will face off in a live Final at Vodacom World in Midrand. (Participants that qualify from other cities will have to arrange their own transport to the venue, if they choose to do so, Due to Covid and lockdown restrictions we will not be making any travel/accomodation plans for any players)

1. Each participant who enters a tournament is aware of all the rules and checks them periodically
2. A player can only create one account. Selling, renting, trading or receiving compensation in any way, shape or form is forbidden
3. Matches need to be played within the times provided, Failure to do so can lead to a forfeit or double forfeit depending on which player has not been on time.
4. Every participant is required to be online in the chat of the tournament they are participating in.
5. Every player is responsible for his own connection and has to have a good internet connection, Please talk to an admin if any players are experiencing any connection issues.
6. Report any issues straight away
7. Each player is required to take at least one photo of the score. This photo should contain: the score, and the gamertag used to sign up
8. in the event that players cannot connect to one another, players with fibre/adsl connections or NAT TYPE 2 connections will have preference over NAT TYPE 3 or hotspot/LTE connections

In Game Rules and Settings

1. Console: PS4
2. Mode: Online Friendlies
3. Tactical Defending only
4. Online squads only
5. Custom Tactics: Allowed
6. Custom Formations: Not allowed
7. Recording all games: ALL matches should be recorded, simply double tap the share button on your PS4 controller to record your match. you will face disqualification should you fail to record the game
8. Teams: Club Teams or International Teams may be used
9. One match to be played, If scores are tied, simply rematch and play a second match with the golden goal rule.
10. Tournament is a single elimination knockout.

1. Take a clear picture of the scores after a match.
2. Send your picture in the chat group.
3. scores must include BOTH participants PSN ID.
4. Failure to provide scores correctly can result in a double forfeit.

1. MainGaminig reserves the right, to make statements and decisions about matters that are not specifically provided for in the rules, in order to maintain fair competition and sportsmanship.
2. MainGaming Reserves the right to change these rules at any given time
3. MainGaming may require participants to validate their accounts through pictures and live videos if necessary

By entering the Vodacom World eFootball Tournament, all applicants and players accept and agree to abide by these Terms and Conditions.

1. Members of the public may participate in the Vodacom World eFootball Tournament.

3. South African I.D will be required to claim any prize

4. Winners of any prizes will be required to bring proof of age to claim their prize

5. MainGaming reserves the right to alter the format of the tournament and requirements for participation in the Vodacom World eFootball Tournament

6. All games are played on their respective original form, No copies or Demos are useable

7. No coaching allowed (for example, people in the audience may not advise a Player while playing).

8. No memory cards or saved games are permitted.

9. Players are prohibited from wearing headsets and may not listen to any music during the Vodacom World eFootball Tournament.

10. It is the responsibility of all Players to be familiar with the controller's functions and mode of operation. If a controller is defective, a Player can pause the game and notify the referee. The referee will determine the controller status in making such a decision. If a Player plays with a defective controller, all results are nevertheless valid.

11. Unnecessary pauses or delays are prohibited.

12. Any action designed to disrupt the opposing Player's view of the screen or ability to select game functions is prohibited.

13. Each game will begin play at its designated time, and as designated on site at the tournaments.

14. Players not present at the designated start time for any match will be disqualified, and their opponent shall be granted a win. Players are encouraged to be in the designated play area 15-minutes prior to game time.

15. Players will be shown their designated station, shall set up the game and immediately begin play. Each Player will have 2 minutes to configure controls,

16. Custom packages cannot be used, nor can anything else that is not available in the in-game pause menu.

18. MainGaming Staff reserve the right to forfeit the Match should participants not present themselves at the sampling unit after their name is called, regardless of any mitigating circumstances.

19. Players shall raise their hands at the end of the game so a referee can record their score. Only scores reported to the referee are official

20. No replays or game interruptions, except for designated pauses to report scores (if any), will be allowed

21. If a game is interrupted intentionally by any Player, that Player will immediately be disqualified.

22. If a game interruption is caused by outside circumstances such as a machine error or loss of power, the game shall be continued from the point of interruption

24. Referees will be identified by a special ID tag.

25. The decision of a referee is final and binding.

26. MainGaming Apparel, Will be used by officials.

27. Use of alcohol or drugs is prohibited on the premises of, or during the attendance of, live events or tournaments, for the duration of the competitive tournament.

28. Players must not be under the influence of drugs or alcohol while participating.

29. Smoking is prohibited except in designated areas.

30. Any player who appears to violate the above terms under this clause may be sanctioned.

31. Players must conduct themselves in a reasonable manner, maintaining a friendly and polite demeanour to spectators, members of the press, tournament or league officials, and to other Players.

32. Players will refrain from using vulgar or offensive language.

33. Abusive behaviour, including harassment and threats is prohibited.

34. Physical abuse, fighting or any threatening action or threatening language, directed at any Player, spectator, official or any other person is prohibited.

35. Abuse to game stations, controllers or any tournament equipment is prohibited.Any person that Breaks any equipment is responsible for replacing that item

36. Any action that interferes with play of a game, including but not limited to purposely breaking a game station, interfering with power, and abuse of in-game pausing, is prohibited.

37. Gambling, including betting on the outcome of games, is prohibited.

38. Video taping/ recording of any images of Vodacom World eFootball Tournament, for any purpose including scouting by Players, is prohibited unless permission has been granted by MainGaming.

39. All Players must be available for any post-tournament awards ceremonies and interviews Granted.

41. The recording, dissemination or any other exploitation of images of the Vodacom World eFootball Tournament is strictly prohibited.

43. Any nationality may the enter the tournament.

44. By entering the Vodacom World eFootball Tournament each Player:

a. assumes sole liability for injuries, including personal injuries and/or damage to property, caused or claimed to be caused by participating in any tournaments or the acceptance, shipping and handling, loss or use of any award; and
b. consents to the use by MainGaming of his or her name, likeness and/or still or moving image on Vodacom World eFootball Tournament website and in any and all publicity and advertising for the MainGaming Tournament or other promotions by MainGaming without any further attribution, additional notification or compensation, except where prohibited by law.
c. Personal Data
d. In order to take part in the Vodacom World eFootball Tournament, the Player needs to provide MainGaming with personal data (name, address, age, email address, telephone number,etc). You acknowledge and agree that MainGaming and their respective affiliates, subsidiaries, parents, representatives, advertising, promotion and publicity agencies are in any way responsible or liable for damages, loss or injury resulting from:
e. lost, incomplete, incorrect, damaged, delayed or mis-directed applications;
f. a Player's participation in the Vodacom World eFootball Tournament or the acceptance, shipping, handling, loss or use of any award or any portion of any award made in relation to the MainGaming Tournament;
g. technical, hardware or software malfunctions, lost or unavailable network connections or failed, incorrect, inaccurate, incomplete, garbled or delayed electronic or other communications.
h. Winner has to produce valid South African ID document no later than 72 hours after winning, if the winner fails to do so, prize will be passed on to the next eligible player.

45. All Tournaments hosted by MainGaming are "FREE ENTRY" That means that we do not charge to use any of the Consoles or Games on display.

46. Only registered members will be allowed to participate in the Vodacom eFootball Tournament .

47.MainGaming cannot accept responsibility for any loss, injury or similar, All participants or viewers that enter the demarcated Gaming area enter at their own risk

49. MainGaming cannot accept responsibility for any loss, injury or death during an event or during travel.